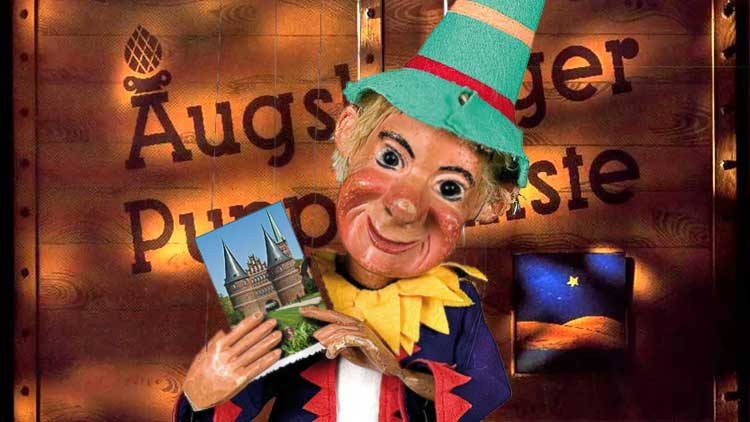 Puppet Theater (Augsburger Puppenkiste) is located in the historic center of the old Bavarian town of Augsburg, in the building of the Hospital of the Holy Spirit (Heilig-Geist-Spital), near the Red Gate.

It was the Second World War … In 1940, actor and director of the Municipal Theatre of Augsburg Walter Amish (Walter Oehmichen, 1901-1977) was drafted into the Wehrmacht army. To entertain your friends, Walter Amish built several cardboard characters and puppet shows began to show. In 1943, in Augsburg, he founded a small puppet theater «Augsburger Puppenkiste». In this he was helped by a spouse Rosa (1901-1985) and his daughter Hannelore (Hannelore) and Ulla (Ulla). November 15, 1943 for friends and relatives was shown the first performance of “Three Wishes”. The second performance was a fairy tale “Hansel and Grettel.” Home puppet theater and performed in the hospital before the wounded.
On the night of February 26, 1944 Augsburg been the next, and most devastating air raid barbaric Anglo-American air forces in which a puppet theater, as well as the entire historic center of the city was destroyed. But thanks to Walter, some dolls were left intact. In autumn 1944 Walter Amish was again drafted into the army, and soon captured. After returning from captivity in 1945, Amish again to do their favorite thing.
After the war, the theater was chosen for the building of the Hospital of the Holy Spirit, built in the middle of the XVII century by the city architect Elias Hall. Despite all the difficulties of the postwar period on February 26, 1948, exactly four years after the destruction of the family opened its Amish Puppet theater tale “Puss in Boots” by Charles Perrault.
On the eve of the New 1951 Puppet Theatre gave a performance cabaret for adults that has become an annual tradition, preserved today. In 1985, after the death of his parents, the owner of the puppet theater has become their eldest daughter Hannelore Amish along with her husband, actor Hans Joachim Marshall and his son Klaus, who took over the management of the theater in 1992.
Augsburg Puppet Theatre for his contribution to theater has been awarded many prizes.
The repertoire a variety of classic fairy tales, among them – the tales of the Brothers Grimm, Wilhelm Hauff, Arab tales. For decades, the theater with great success are “Aladdin’s Magic Lamp”, “Little Longnose”, “Little Witch” and others.
In addition to stories, theater performances and provides for the older generation. It’s “The Little Prince” by Antoine de Saint-Exupery, “The Threepenny Opera” by Bertolt Brecht and others. With great success here are putting on the music of famous composers, among them – “The Magic Flute” by Wolfgang Amadeus Mozart. Remember here and Russian classics in the theater was staged musical fairy tale by Sergei Prokofiev’s “Peter and the Wolf.”
Puppet Theatre Museum
October 6, 2001 on the first floor of the theater building was opened Puppet Theatre Museum, which has long been a dream Hannelore Amish. The museum can be seen dolls – the participants the very first theatrical productions, as well as the scenery for the performances staged at the theater at different times. Visiting Theatre Museum, you can learn a lot about the manufacturing process of puppet characters, see the tools and materials with which created the dolls.